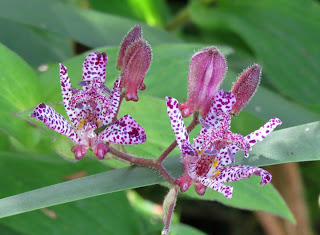 Was there ever an Easter like this Easter?  One when the sun shone unremittingly throughout the whole weekend?  Although we are all hoping the drought will break soon, for a variety of reasons, most of us were secretly  happy that it did not happen through the long weekend.
The Head Gardener and I managed to a little time away to catch up with family, and spent some time on family history matters, but there was still a spare hour or three in the garden, with some lawn mowing and garden tidying carried out.
I loved working among some of my favourite plants that flower at this time of the year, but they are almost all plants the Head Gardener has no time for – at all.
Take the wonderful paintbrush lily that is flowering its head off in a large container on the patio.  This was originally a gift from a gardening friend about twenty years ago, but it has still to arouse the enthusiasm of the Head Gardener.  It is one of the many South African members of the Amaryllis family, and like many of its relatives it flowers on naked stems before there is any sign of leaves.  But unlike its kin the naked ladies and the wonderful Crinum, this one has a short stem, about 15 cm long, and relatively squat flowers, with small petals.
The species in flower at the moment is Haemanthus coccineus, probably the most common of these plants in New Zealand gardens, although none are really found that often.  It is totally summer deciduous (a pointer to its coming from winter rainfall areas of southern Africa) and the first signs of life in the autumn is a colouring at the lips of the large bulbs, which sit slightly above the surface of the soil.   These orange-scarlet buds slowly creep upwards, until they are about 15 cm high, when the tightly sealed lips of the lower open to reveal an astonishing ball of golden anthers, looking for all the world like a big red shaving brush.
The Head Gardener is even less impressed with the white species H. albiflos, which flowers later in the year, but I would not be without these charming and slightly oddball South African bulbs.
And I would not be without a toad lily or two either, although again, the Head Gardener is less than impressed with them too.
These are Tricyrtis species, members of the Lily family, generally from Eastern Asia, and they are perennial plants that grow naturally in the moist soil on the edge of forests, so they are ideally suited to semi-shaded places in our gardens.  I guess that it because they live in damp places they are called toad lilies - I cannot think of any other reason.  The flowers are certainly not toad-like, but rather like refined orchid flowers, usually with curious markings on the petals.
They flower at this time of the year when the garden can be a little barren of colour, and even though they are not extremely showy they are attractive perennials.  They are at their best in the same sort of conditions that hostas, hellebores and other moisture and shade loving plants thrive in.
I grow a couple of different forms but T. hirta, one of the best, is probably the most commonly found species in New Zealand.  It has white flowers generously splashed with purple.  The leaves in this species are also attractive – clean, mid-green with ribs reminiscent of hosta leaves.
Posted by Unknown at 11:14 AM