Couch in the border! 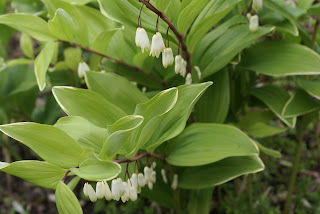 Through the last few months I have been watching a piece of couch grass make its way out of the back lawn and into the end of the large mixed border in our backyard.   It had made its way into the middle of a clump of variegated Solomon’s Seal before I noticed it, then it spread its runners out into a couple of clumps of lungwort.  I have been waiting for the soil to freshen up before tackling it, knowing that digging in the hard soil would only snap the runners.   I was probably the only person in the region who was happy to have a wet weekend, and to have the chance to deal to this pesty grass before it got too far out of control.
The first task was to carefully take the perennials growing in this area out.  I wasn’t unhappy about that as it was more than time to do that as some of the plants had been in large clumps for many years.
The variegated Solomon’s Seal had been nibbled away at last year, when I took some rhizomes off the edges of the plants as part of my contribution to the new border in Queen Elizabeth Park.  They are now well established down there, and part of a wonderfully refurbished border that is a credit to the Friends of the Park, and to Doug Bailey and his team.
Variegated  Solomon’s Seal, Polygonatum odoratum 'Variegatum', has great foliage value, having arching stems which carry lance shaped, green leaves with white margins but it also has delicate, creamy-white, fragrant, bell shaped flowers dangling from the stems in mid to late spring.   I love this plant in spring, when it is quite light green, as it makes a good contrast to the iris seedlings that grow alongside it.  It is a little bit of an expander – it spreads by finger sized rhizomes – but in all the years that it has been here it has only grown to about 60 cm across.
The pure green form is just as good in the garden although it is a big more vigorous, growing perhaps a metre tall as opposed to the 80 cm the variegated form stays at.   Either form will grow well in full sun, but I think they are both best with light shade, and slightly moist soil.
Growing among these rhizomes in my garden, and slightly difficult to tell apart from the nodes on the couch, were a few clumps of the pink form of Lily of the Valley, Convallaria majalis ‘Rosea’.   The white form of the plant was a major favourite in my mother’s garden – she grew masses of it underneath the living room window in a very damp spot, and it always thrived.  I have a few measly plants of the white form struggling along in the garden, and an equally small number of buds of the pink form, also struggling.  I am sure my failure to grow these well is simply that I do not have a wet enough spot in our largely dry garden.
It is, of course, like a miniature version of Solomon’s Seal, with hanging bells of white (or a slightly muddy pink) pretty enough to look at in their own way, but mainly grown for their outstanding sweet scent.  For those of you who are royal fans, they featured in the Duchess of Cambridge’s wedding bouquet.
The two biggest clumps in this part of the garden were both lungworts, Pulmonaria.   These are outstanding foliage plants, doing especially well where conditions are a little less than ideal – in slightly shady areas, or those that are a little dry.  They derive both their common name and generic names from the supposed similarity between the leaves and the inside of lungs.  Personally I hope my lungs are not bristly haired and green – I cannot imagine that would be good for my health – but I accept that the name largely derives from the spotted nature of the leaves.  As a result of this look-alike perception, herbalists believed that the leaves were good for alleviating lung problems.  Science does not back this claim.
These are lovely garden plants, with some older forms having a mix of blue and pink flowers on the same plant, but modern forms tend to be coloured with one colour only, and the spots have been developed to become more dominant.  One of the clumps in the garden that I divided this weekend  is of the modern variety ‘Raspberry Splash’,  which has slightly more pointy leaves than average, all covered with lots of white spots.  The flowers are deep reddish pink, and carried in late spring mainly, although there will be sporadic flowers later.  This has made a sizable clump in my garden, and always looks tidy.
‘Majeste’ is the other variety I grow – and this is something special.  The flowers are pink and blue, but to be honest they are not the attraction for this one, it is the magnificent (or majestic) solid silver foliage, covered with fine hairs.  Again, this has been in the garden for a long time and always looks fantastic.
Posted by Unknown at 4:28 PM