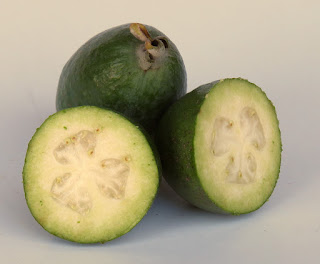 In a well-known poem devoted to autumn, the English Romantic poet John Keats, whose relatives live in Masterton, called the season a time of “mists and mellow fruitfulness.”  Writing in the early 19th century, Keats would have had apples and pears, medlars and other old world fruits in mind, but here in New Zealand in the early 21st century, an entirely different set of fruits scent our misty season.
Perhaps the most uniquely New Zealand fruit is the Feijoa.  I am not claiming this as a native plant, but New Zealand seems to be the only place in the world that the fruit is grow on a large commercial scale, and the only place where it is a common garden fruit.
Botanically, the feijoa is member of the vast myrtle family, and thus is a distant cousin to our rata and pohutukawa, a kinship that can be appreciated by looking at the flowers.  They occur in the wild in highland parts of different countries in South America, and are now grown as a crop in New Zealand and a few other temperate countries.
They were introduced to New Zealand in the 1920s, and quickly became very popular as a reliable evergreen shrub that could be used as a small feature tree, but was also well-adapted for use as a shelter tree, and was often grown as a tall hedge.  Even under these conditions, the feijoa will crop, and most of us will have eaten these fruit as children, usually from trees that bore so many fruit that the owners could not cope with it all.
Opinion is divided on exactly what the fruit tasteslike.  Some say the flavour is reminiscent of pineapple, guava and strawberry, while other catch hints of mint.  Those who do not like the flavour usually say it tastes like an unpalatable medicine!
When I was first involved in horticulture there was a very restricted range of varieties available, and they were not that much better than the seed grown plants offered for sale for hedging.  That has changed in the past few years and there is now quite a range of different varieties available.  Some are self-fertile (‘Unique’ is the most reliably so) but most will do better if there is another variety growing nearby.
I have grown ‘Unique’, and it is a very reliable cropper, with medium to large fruit which it carries from an early age but there are many others around.   ‘Pounamu’ is a newer smooth skinned type, with fruit that ripens early in the season – they should be edible by the end of March – while ‘Opal Star’ is a later fruiting form with strong flavours.  ‘Gemini’ and ‘Apollo’ are also reliable forms, although both need another variety nearby for pollination.
Feijoas are very easily grown, but they do best in well-drained moist soils, rich in humus.  They will cope quite well with periods of drought but need abundant watering during fruit maturation if full sized fruit are to be enjoyed.  They need little trimming or pruning, but can easily be shaped and trimmed if that is needed.  Give them as much sun as you can, but they will also cope with partial shade.