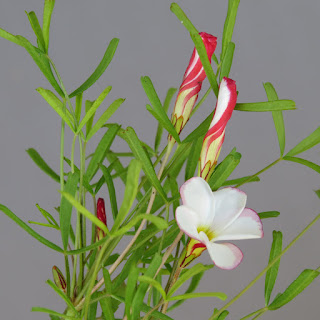 I had a special treat during the past week.  A regular reader of this column rang me to say she had a special present for me from her late mother’s garden – a big pot filled with oxalis.
I know most of you will be appalled at the idea of such a gift, and anyone who has struggled with any of the few pestiferous members of this widespread family of bulbs will throw their hands up in horror at the thought of a gift of such pernicious, unwanted plants.
But those of you who are fans of small bulbs will have shared my excitement at the offer, especially as it was a pot of the intriguing O. versicolor the creatively coloured little plant with barbers’ pole flowers.  This little charmer has a slightly different habit of growth to most species as it forms a very low-growing sub-shrub with almost woody stems, only growing a few centimetres tall.  At this time of the year their flowers are in evidence, and what funny little flowers they are.  The plant produces crimson striped, funnel shaped buds like tiny striped old fashioned barbers poles.  They open to reveal pretty white cup-shaped flowers with crimson margins.
We grew this plant years ago in a warm garden in front of one of the glasshouses in the nursery, in a bed where one of our sons grew his miniature roses, and it flourished, which gives a good indication as to the sort of conditions it requires – warm soil, a sunny open site, and a bit of watering over the summer.  It is reportedly half hardy but it coped with anything our climate could throw at it.  And it did not spread at all!
I have a bit of a thing about the whole group of these lovely little bulbs and have a number of pots growing in full sun underneath my office window, many of whom have been in flower over the past few weeks.
I think my favourite of these might be the delightful South African species, O.  massoniana.  This is a strong growing and very free flowering form, ideally suited for growing in containers.   It has the most amazingly coloured flowers – sometimes called ‘bright orange’, but really more of a warm, light terracotta colour with bright golden centres.   Unusually for Oxalis, this species can be propagated from cuttings of the tree-like shoots.  I find this one is not as strongly-growing as some of the other species I grow, but it is startlingly beautiful when in flower in its terracotta pot.
The various forms of O. pupurpea that I grow are now just slightly past their best.  This is wildly variable South American species, and is grown for its attractive winter flowering habit, and their attractive cut foliage.  There are a number of forms available in New Zealand, and an even wider range on sale overseas.
Among those I grow, the one I like most is a deep purple foliaged variety which I have seen described as ‘Nigrescens’.  Naming of these plants can be confusing as nurseries have confused similar looking types, and it may be possible that it is the same variety grown in the rest of the world as ‘Garnet’. The deeply coloured, clover-shaped leaves are wonderfully offset the glowing pink flowers.  These flowers are very difficult to photograph effectively as they have a shiny gloss and the flowers always appear lighter in photographs than they do in the garden.
I grow two other forms of O. purpurea,  both having (oddly enough) green leaves; one with glowing white flowers, the other with the same shining pink flowers of the dark-leaved variety.  There are yellow and cream forms of this species too, but I have never seen them on offer in New Zealand.


This species increases very well in the pots, and, even though there are plenty of species I would happily plant in the garden,  I think I would be hesitant to plant any of these varieties in light well-drained soil as they might get a little too territorially ambitious and could multiply a little too quickly.
Posted by Unknown at 5:57 PM