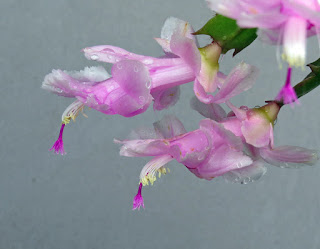 Among our favourite plants there are many with such ugly names that we prefer to call them by their old ones.  The fabulous winter flowering iris is known by most people as Iris stylosa, surely a much classier name than the now correct, Iris unguicularis.  Similarly, the winter flowering cactus that I always knew as Zygocactus has now been renamed with the un-euphonious Schlumbergia. I think I’ll stick with the old name, or perhaps use a common name.
In the Northern Hemisphere these plants are known as Christmas Cactus, rather obviously because they flower in the middle of winter.  Here in New Zealand they are sometimes called Crab Cactus, from their unusual flower shape, or more commonly, chain cactus (although there are other cactus known by that name) or inch cactus, from the fact that the leaflets grow an inch at a time.
As a matter of botanical interest, these “leaflets” are actually the flattened branches of the plant – it does not actually make any leaves, but carries out photosynthesis through the branches.
These wonderful plants, given their “new” name in the 1890s to commemorate Frederic Schlumberger, a French collector of cacti, but it never became popular, and to be honest, most modern nurseries do not use it now either.
Although these are true cactus plants, they are not desert plants as you might expect - they originate from the jungles of Brazil, where they grow as epiphytes on the trunks of large trees.
I am sure that most people will be familiar with these cute little winter flowering plants, usually from ones that have been handed around among the family, as they are so easy to propagate.  Once they have finished flowering, the “leaflets” can be detached and popped into potting mix where they will quickly grow new roots and start all over.
I have a small collection of these in the glasshouse where they can happily sit on a bench until they start to flower.  The most magnificent of these is a lovely light pink flowered form, which I started some years ago as a cutting from a plant that a workmate’s mother brought in to work for us to share the flowering.  I do not know that she thought we would also pinch one or two leaves!
The other plants I have are some I bought a few years ago from a nursery, and they were very modern ones with quite different colours.  These are very popular potted plants in the northern hemisphere, as you can imagine for a plant that flowers at Christmas, and breeders have got to work on them, expanding their range from the older forms which tended to be in the cerise pink range.  I have to say that these new ones, which have orange, bright red and even yellow-ish, have not been as vigorous as the light pink form but they are still very attractive.
As you would expect from an epiphyte (a plant that lives attached to another) these guys need really good drainage.  I think you could probably grow these in an orchid potting mix but I have just used a standard mix with some orchid mix added to it, about 60/40. That does not mean they like to dry out – they do not, and it is important to keep a steady supply of water.  If allowed to become too dry they will quickly withdraw water from the leaves which will shrivel.
If you want them to do well it pays to give them some food every once in a while – I just sprinkle slow release pellets on the surface and it does the job well.  They prefer semi-shaded conditions, as you would expect from a jungle plant, and the leaves can easily burn if left in full sun.  If you have a really warm spot, you could even try growing them on the branches of a tree.