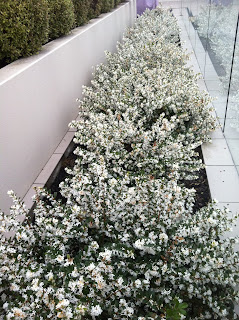 Many trees and shrubs that flower in the late winter (or early spring) have pale flowers, often highly scented.  Flowers use scent to attract pollinators, usually bees and butterflies in the day time, so in a sense brightly coloured flowers offer no advantage.
This week I saw, or rather smelt, two new white-flowering, highly scented shrubs.  The first of these was on the ledge at the workstation of a colleague.  She had picked some flowers off her Camellia transnokoensis and brought them into work.  In the warm work environment the few sprigs of flower were enough to scent a small room, with their spicy, heady scent.  To my nose it smelt slightly reminiscent of the once common winter-flowering, shrubby honeysuckle, Lonicera fragrantissimum.
This camellia species from Mount Noko in Taiwan is sometimes given the colloquial name of ‘transnok’, and has with dainty leaves, perhaps willowy, with a graceful upright habit. The pure white flowers open from tight buds marked with deep pink. This shrub is ideal for screening or hedges, and over the past few years has become very popular.  It will grow to about three metres ultimately but is easily kept much smaller by clipping.  Like most camellias it thrives in moist, humus-rich soils with a neutral pH.
The other new plant (to me at least) was one that was recommended by an old friend (the friendship is old, not the friend!) who had seen it growing in a local garden – the slightly scarily named Osmanthus variety, ‘Pearly Gates’.
I have grown some Osmanthus shrubs in the past – larger, autumn flowered forms mainly, with overly heady scents, but I had not seen this lovely form of the smaller growing species O. delavayii.  This is of the most fragrant of all flowering shrubs, its usually insignificant flowers having ta rich heady, fruit-filled scent. Plant hybridisers have been at work on this species and in the past few years a couple of new varieties have been released, with much larger flowers, while retaining the exuberant scent.
The better of them, ‘Pearly Gates’ has not yet become grown widespread but when gardeners learn about its good points it will soon become a firm favourite, as it has a lot of things going for it.  It is a very hardy evergreen shrub, providing good clean texture, and the white tubular flowers give a great display at the time of the year when there is not much out in the garden.  It is quite slow growing and makes a perfect hedge as it is very suitable for trimming – one Masterton gardener has planted it along a contained area between a wall and a glass swimming pool fence and it looks stunning.
This is not too fussy as to soil conditions – it will cope even with quite poor soils – and looks at its best when clumped into reasonable sized groupings.  With the addition of the scented flowers, it makes a great basal planting for near a house.  Left to its own devices it might grow to two metres, but its compact growth habit, and its ready acceptance of trimming, make it easily kept to a much smaller size.