Give peas a chance 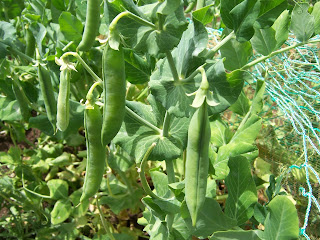 Although it is just the very start of spring at the moment, it is the time to start thinking about the Christmas day meal, and to start preparing the vegetable garden for the fresh vegetables that form such an essential part of our season festivities.
As much as I love Brussels Sprouts, the iconic staple of the English Christmas feast, I certainly would not want to swap a plate filled to overflowing with potatoes dug freshly from the garden once the presents have been opened, and recently harvested and podded peas.
We do not grow peas every year, as we are now constrained as to the size of our garden, and wit only two of us at home we concentrate on other vegetables, but if you have young children anywhere in the vicinity,  you probably should grow some.  They are a great vegetable for encouraging young gardeners, as they are relatively easy, normally free from diseases, and can be seen growing by impatient youngsters.  And of course, and freshly picked and podded peas taste so much better than any bought produce.
In Wairarapa, early September is a good time to get sowing, provided you have a nice well-drained site that is not too cold.  Peas generally need to be grown through the cooler months as they are very prone to mildew, and once the warmth and humidity of summer kicks in, they will just get disease and fail to thrive.  If your soil is not already supplied with plenty of organic matter, it pays to add some well rotted compost  to it,  As well as adding extra nutriment it will also improve the soil texture, making it better for the plants to grow.  As you work the compost into the soil, make sure it is cultivated to about a spade’s depth, and worked to a fine tilth.
Peas are probably best sown rather than planted out from seed trays – they are certainly a lot cheaper if you sow directly as pea seed is relatively inexpensive – but there are some pea varieties that will transplant alright, and if you just want a few plants of sugar snap peas or snow peas to grow in a container (they do very well grown that way) it might be just as easy to get the head start that nursery-grown plants offer.  The kids will love having pots of peas near the house too.
If sowing, just make shallow rows in the well prepared soil, the rows about 45 cm apart, and each seed about 5 cm away from its neighbours in the row.  If you want to give their germination a kick start you can soak the seeds in warm-ish water for an hour or two before sowing, but this is not essential.
Newly germinated seeds are like magnets for birds, and to a lesser extent, slugs, so it pays to be careful and ready for the onslaught.  I like to use a roll of chicken wire, rolled over to form a tunnel, as this can be easily removed as the plants grow up and can be used as cover for other young seedlings.  You can also just keep the chicken wire in place and use it as a base for further support by adding bamboo stakes, or even just garden twigs.  Plenty of people just start off with twigs, and that system works well too.  Make sure to put some form of slug prevention down as the plants are just popping through the soil.
It pays to make sure the peas are not too crowded in by other tall growing vegetables as that will taken some of the sun off them and will also prevent good air circulation which is the best defence against mildew.  You should have few other pests, but aphids are sometimes a small concern – just use some organic neem oil and them and that should keep them under control.  I am not sure that aphids do too much damage to the growing plants on their own but they can help spread virus diseases and you do not really want that in the garden.