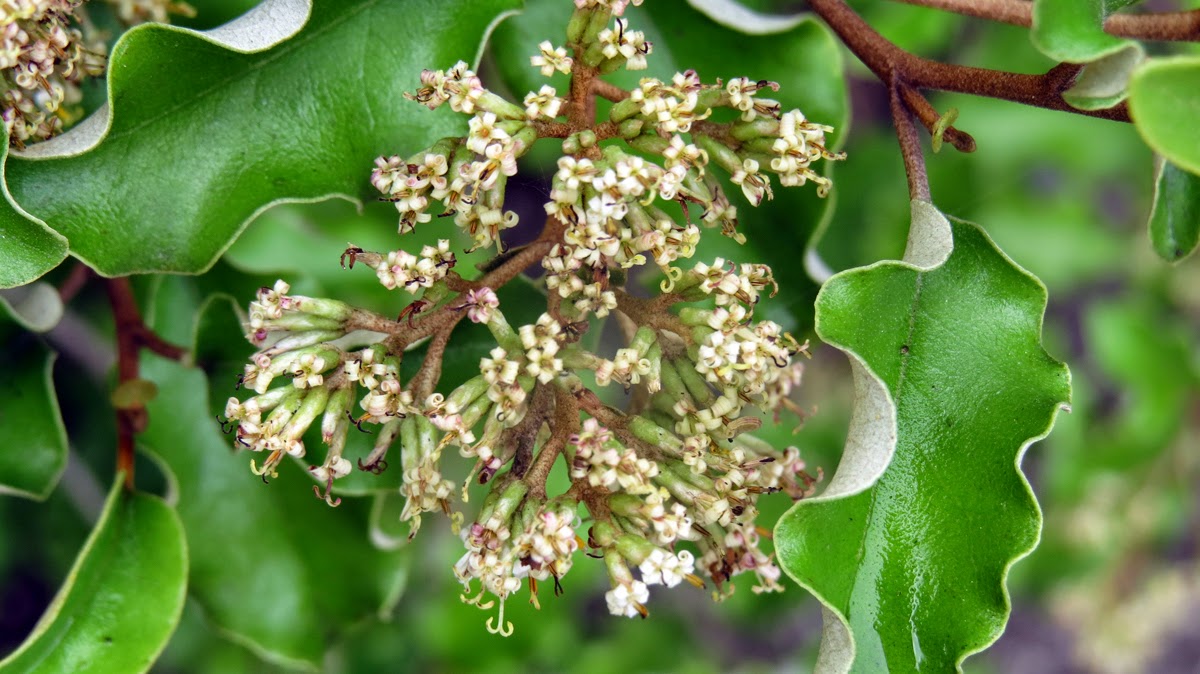 A minor star of the native plant world that is showing off at this time of the year is one you might not even notice – the once ubiquitous Golden Ake Ake, Olearia paniculata.  This is a very tough coastal daisy – again a New Zealand native – which was once quite commonly grown as a hedge.  It has light yellow/green leaves which are covered in white hairs on the lower side.  These leaves can be flat but are more usually very wavy, and they are born on orange stems.  If the plants are grown as small trees and are allowed to develop a trunk, the bark has wonderful texture.  One catalogue I looked at described the bark as ‘stringy’, which is hardly a flattering way to talk about delightfully exfoliating bark, although it does tend to come of the tree in strips.
There is a mature tree near the fernery at Queen Elizabeth Park, which has this delightful bark – it is worth taking a quick detour to look at it.
However, it is this time of the year the Golden Ake Ake lets forth its greatest asset – the totally inconspicuous flowers that you would never even notice, except for one standout feature – they have the most amazing sweet and fruity scent – reminiscent of the Easter orchid. We have a couple of these trees in the backyard.  One is actually growing in the neighbour’s garden, but another has grown as a seedling of that, with much lighter foliage, so I am happy to leave it growing there.  At this time of year the scent is wonderful, especially in the evening.


There are many native olearias, all known by various forms of “daisy” – coastal daisy, mountain daisy, holly daisy.  I am sure you get the idea.  Some of them are primarily grown for their foliage, while others have pretty white daisy-like flowers. Perhaps the prettiest of the New Zealand species known as Streamside Daisy, O. chessmanii, which is smothered in white flowers each spring.
Posted by Unknown at 5:42 PM