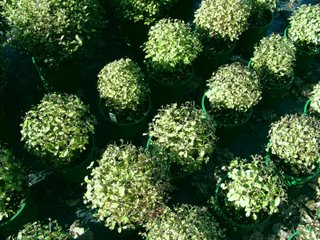 
I recently had the pleasure of going to see some nursery-owning friends, to have a look at a new plant they will be releasing onto the market later this year, or perhaps next autumn.
The Portman family has been gardening at Clareville for many years, at one time having a very interesting open garden behind their old cottage. As people flocked to see their garden, they started to sell plants – out of a wheelbarrow at first, if I remember right. They soon expanded their selling operations, and have a very successful garden centre for a number of years.
A few years ago, Allan Portman took me out to their nursery area and showed me a dwarf Pittosporum tenuifolium he had raised from seed. It was about the time the first dwarf forms of this species were being touted in the industry but it was obvious that his form offered something new. It had tiny leaves of a grey-green hue – as is befitting of a plant called the Silver Matipo – and seemed to have good basal branching. This is very important if the plant is to remain dwarf.
This weekend Allan was recovering from the flu, bit it did not take too much encouragement from wife Fay and son Stephen for Allan to join us out in the nursery again, to show us how well the little seedling I had seen had done in the intervening years.
It has done very well thank you.
The Portmans showed me a line of potted specimens, each globe-shaped and about 30 cm high. They were very attractive little plants and I am sure they will find a ready place in the market. It seems to me that they have superior branching to other forms I have seen, and they also have the good habit of keeping leaves right down the branch. This attribute is very important for those who want to trim the plant, and I can see that this little beauty will be used for topiary and hedging by many gardeners.
This new form, which will be sold in the trade as “Elfin,” is just one of a number of interesting seedlings from the Portmans’ stock tree. Allan is very cagey about where the tree is – he would not even give me a hint, and I do not blame him, because it seems to throw sports quite freely. Among the other seedlings I saw a couple of very fastigate forms, growing like little grey-green columns – and a number with interesting purple and copper shades.
“Elfin” will look great as an untrimmed specimen in a care-free garden, as it has such an attractive shape and colouring. It will make a splendid patio container plant, and I am sure there will be many gardeners who will use these for hedging.
This plant is probably going to go international, as it is being trialed in a number of countries as we speak. Keep an eye out for it.
Posted by Archivist at 8:58 AM

We are state certified tree nursery specializing in native plants and trees, shrubs, fern, and perennials as well as pond plants and wetland mitigation species.

I am reading this article second time today, you have to be more careful with content leakers. If I will fount it again I will send you a link

It is useful to try everything in practise anyway and I like that here it's always possible to find something new. :)

good morning dudes. I'm really into shoes and I have been digging for the sake of that exact model. The prices for the velcros were all over 190 pounds on every page. But definitively I found this area selling them someone is concerned half price. I absolutely like those [url=http://www.shoesempire.com]gucci sneakers[/url]. I will definetly order these. what can you say about it?