A day on Mount Holdsworth - and what a day 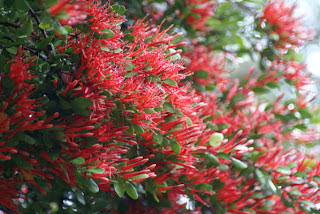 I got an e-mail from a geologist friend the other night, telling me that the native mistletoe was in flower on the Atiwhakatu River bank on Mou=nt Holdsworth in the Tararua Range, just upstream of Donnelly’s Flats. I had heard about this particular plant – a specimen of Peraxilla tetrapetala I think – but I had never seen it in flower. 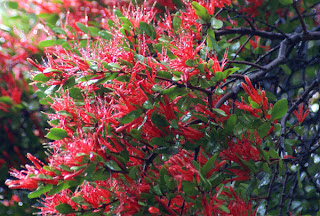 The mistletoe is very rare in the Tararua Range now – as it is most places – and the few trees that have specimens have been banded with wide strips of metal to prevent the opossums from reaching them.
It is worth the effort as they are spectacular plants. Older books talk about this plant being common in the Tararuas. What a sight it must have made.

I pushed on up the track, and went up the Hooper Loop track to Mountain House. On the way up a stiff climb I came across a little group of tiny orchids in the mossy floor underneath the beech. I think they are Caladenia nothofageti.
[An orchid expert friend has identified this as Adenochilus gracilis] 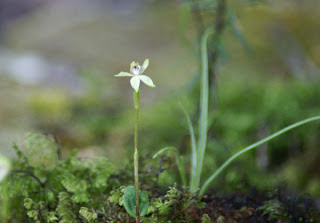 Coming back down the track I found the clump of greenhoods I saw in flower last year, just before Rocky Lookout on the way down. I think they are Pterostylis australis, but greenhoods look remarkably alike! 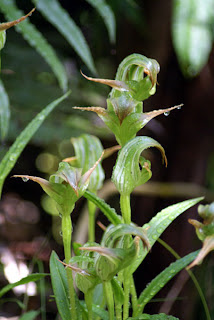 [The same friend, Ian St George, had this to say about the greenhood - The greenhood is probably P australis, but there are features of P. areolata and P. patens – I think there is a fair bit of hybridisation among these insect pollinated species]

I had to stop at Rocky Lookout on the way back down and check whether the Winika cunninghami was in flower around the back of the rock – it was, but very sparse! 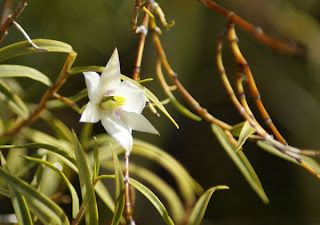 Posted by Archivist at 7:51 PM

Nice blog. I will keep reading. Please take the time to visit my blog about Orchid Care

You lucky thing seeing native mistletoe, it is such a beautiful but rare plant these days. I`m pleased to hear the plants are being protected against possums.We have a pair of tui nesting here at the Gardens, the first for a long time - low and behold any rat, possum or other nasty creature get too close, there are traps galore around and on the tree !!
I extracted the first honey this season, have 20 litres of gorgeous golden liquid to sell and give away - makes great Christmas pressies !

Hi I was referred to your blog by David! Lovely to see the Peraxilla in bloom, it's such a treat. Please come and check out my blog about botany (and of course politics and stuff!). I have provided a link to yours - there are not enough blogs about plants!