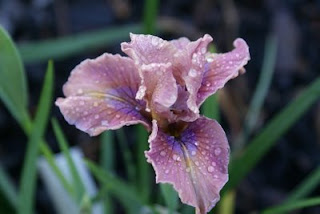 This has been one of those weekends – I do not seem to have stopped, and it is now late-ish on Sunday evening.
I started the day with a quick sprint up to Powell Hut on Mount Holdsworth. A friend told me they had managed to reached the hut in two hours (the normal time is about three to four hours) so, of course….. well, I went as hard as I could and got there in 1.55. I doubt whether I could get there much faster.
The problem was I needed to be back home by lunchtime, as I was taking the family to see the Christmas Parade. So I had an apple, and drunk in the wonderful view along with some cold water, then came back down. In a way it was almost sacrilegious, as it was a day out of the box – sparkling clear and not a breath of wind.
Still I got to see Christmas Parade. For what that was worth.
The afternoon was better as I swam and cleaned the pool, then the whangai grandkids arrived, so I swam again! I managed some gardening in between, including harvesting potatoes and raspberries. The last of the firewood arrived just before tea so I stacked that and went and had a rest.
Today I was awake early – too early for the gym – so I went for a long bike ride, then gardened some more. We went out to the Mauriceville Fair, taking our son Owen’s friend Sophie, with us. Met up with lots of people I knew, including Kay from New Pacific Studio, who had a stall there, and Rachel, an artist from New Orleans doing a residency at NPS.
It is not the greatest fair, but it is a day in a part of the country I like.
I came home and gardened some more, and took some photos of some Pacific Coast Irises I have out.
It is very late in the season, and two of the irises are seedlings that should not flower until next year – they were sown March 2007 – and next year they will almost certainly settle into normal flower patterns. They are both nice ones of my own breeding, one an unusual salmon colour with green and blue undertones (as seen above) , the other a red with a deep signal. The salmon one fades during its time, as will be apparent from the pics. 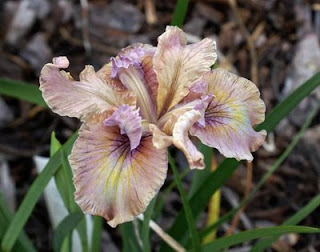 The other, though, is a Mocha Melody seedling, with good branching, that should have flowered with its siblings six weeks ago. If this is a genetic trait I will be very excited. As it is, I have two seedlings to cross it with! I am crossing at the same time as I am watching the seed pods ripen on my other crosses.
There was another one out. This is very unusual. It has four legs, it bares it teeth every timne I go past, and it growls and barks a lot. 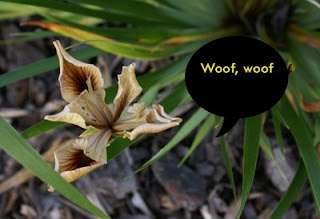