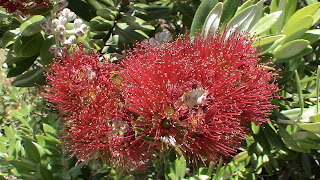 The Christmas season usually brings a few horticultural gifts for those of use who garden. Our relatives, struggling to find a gift for someone who has almost everything they need, always know that a gardener is easily satisfied. A gift voucher for your favourite garden centre, or a garden book or two will always be very welcome. And plants can never go amiss.
There are, of course, a number of plants closely associated with Christmas, sometimes a little out of kilter with the season though, with our hemispherical flip around.
The holly, with its prickly leaves and bright red berries in the middle of winter, is loaded with obvious analogies for a northern hemisphere festival, but in the south, by mid-summer, most of the berries will have well and truly been picked over by birds.
The mistletoe is different. If you know where to look, there will be patches of New Zealand mistletoe in flower. There is a wonderful one in flower at Mount Holdsworth at the moment. It is off the beaten track, but if you ask at the caretakers’ office he will happily tell you where it is. The species in flower at the moment is the bright red one, and it is a rare treat to see it. Opossums have decimated most native mistletoe plants, so take the chance to see this beauty.
The traditional New Zealand Christmas tree is the pohutukawa, again with red flowers (usually – there are yellow forms) and again, flowering well at Christmas – usually.
Pohutukawa and rata are brothers, members of the Metrosideros genus, and more or less closely related to Australian gum trees, Eucalyptus, South American fruits, Feijoa and Australian bottlebrushes, Callistemon. They are also, a little less obviously, related to manuka, Leptospermum, and ramarama, Lophomyrtus.
In northern and coastal areas it is pohutukawa that are usually called the New Zealand Christmas Tree, while rata is sometimes given the name in inland areas. Most years it is a little of a misnomer, as it generally flowers a little after Christmas, but this year it is flowering early, in time for the festive season. I have to say, much as I love ratas, they lack the stunning floral affect of a pohutukawa, the flowers generally being slightly smaller and slightly darker.
There are two main pohutukawa species in New Zealand – the mainland form, and a different species from the Kermadec Islands. The latter has smaller and more rounded leaves that the mainland form, and tends to flower spasmodically through the year rather than in one sustained burst.
If you are keen to try a pohutukawa in our district you must bear in mind that they are frost tender – especially when young – and need a frost-free area to grow well. There are some nice examples growing in Masterton, up on Lansdowne hill, so they can cope with a Wairarapa winter if grown in the right are, and given some protection.
Most of us, though, will have to be content to grow one in a pot. Fortunately, that is not hard – in nature they grow in hard, exposed places on the coast and they will flourish without too much care in a large pot. It would pay, though, to make sure you bought as named cultivar, as you would be able to ensure you got the flower colour and growth habit you were interested in. I think ‘Scarlet Pimpernel’ is the one to go for – it is smaller growing than most species, it has crimson red flowers (others can be darker and almost rusty coloured) and it flowers all at once usually. ‘Te Kaha’, selected from a famous East Coast tree, is similarly mannered but the flowers are more orange coloured.
‘Mistral’ is a deeper flowering form, but is also slightly hardier, being a natural hybrid between pohutukawa and southern rata. It flowers slightly before Christmas.
Posted by Unknown at 4:54 PM