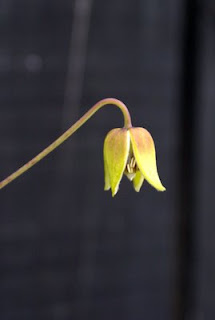 I always say I am the easiest person in the world to buy a present for. Any kind of garden voucher or book voucher will suit me fine. Those who know me really well might even be able to work out what sort of garden plants or books I would like.
The Head gardener knows my tastes better than anyone, so I was not surprised that she returned from a recent trip to Taranaki with a book or two – albeit rescued from the sales table at the Inglwood Public Library. As well as a novel or two, there was an interesting book on the cultivation of Clematis, written in Australia.
I grow a few native Clematis species, and have grown some of the more popular garden varieties, but there is an amazing number of hybrids available, most of which I have never grown.
I am keen on some of the autumn flowering species and varieties, but there is a problem with some of them – they have delightful fluffy seed heads which convinces everyone that they are the dreaded (and mis-named) Traveller’s Joy, C. vitalba which has become such a pest in our native forest lands.
One of the best of these is the delightful yellow-flowered species, C. orientalis. This, in its best forms, has butter yellow flowers that nod on the end of stiff stalks. It flowers from about Christmas time, with spluttering of flowers through until autumn. At the same time silken flower heads are forming, providing a nice contrast.
This species is quite energetic – it can grow about eight meters in a season – but looks great when grown among dark-leaved trees. It is deciduous, losing its leaves over winter, when it can be trimmed back.
I have grown the similar looking C. tangutica, although it is not in our present garden. This also has small lantern-shaped flowers, lighter yellow in this species. This is sometimes called the orange peel Clematis, although that common name really belongs to C. orientalis.
Again, this flowers from about the New Year, and later flowers will be held among the silken flower heads. These heads will stay safely on the plant until the winter winds and rains destroy them.
Both the above are very hardy and will cope with anything our climate throws at them. They should be planted relatively shallowly – do not plant and deeper than the mark in the planter bag – and make sure you keep them well watered while they are being established. Once safely away they require no special looking after.
Posted by Unknown at 3:11 PM

Very informative post, thanks! Do those books say anything about clematis wilt? I have a problem with it and can't figure out what to do.

Hi Tatyana - It is not something I have had to deal with but I think the best thing to do would be to spray all your clematis with a systemic fungicide in the early spring.