In these hot and dry days of summer it is good to have some indicator plants that will let you know when the rapid application of some cooling and quenching H2O is urgently needed, and few garden plants do that as effectively as hydrangeas.  Once they have been in moisture deficiency for a day or two they will quickly hang their flower heads and withdraw the water from their leaves, their dried-up hangdog look a sure-fire indicator that you need to get the hoses out and watering commenced.
The popularity of these summer blooming stalwarts has waxed and waned over the years.  Once very popular in New Zealand gardens, they fell from grace a little, with a generation of gardeners regarding them as somewhat common, but they seem to be having a bit of a revival at the moment, perhaps spurred on by the arrival of a number of new varieties, and the uptake of gardening by a younger generation.
Older gardeners will recall when all gardens had a dollop of hydrangeas, often planted on a south-facing wall and then neglected.  There they would provide deep green foliage throughout the growing season and, as long as they were not butchered too badly at pruning time, they would usually furnish a nice display of flowers over the summer.  My first garden had such a row of hydrangeas, all healthy growing, awaiting my first pruning, then failing to flower for a couple of years as I pruned them too hard and somewhat injudiciously.
My clearest recollection of those hydrangeas is the role they played in my first attempts of growing plants from cuttings.   I took slips from a number of different rock plants I had in another border, and lined them out in freshly-turned garden soil, using hydrangea trimmings to mark the end of the rows.  The inevitable happened – the only cuttings that struck were the hydrangeas!

All these were the most common form of hydrangea, ‘mop heads’.  This slightly disrespectful epithet denotes that the flower heads are entirely composed of sterile flowers, with much larger florets than the fertile flowers.  These flowers can look a little heavy, and indeed can be more than a little weighty, especially after a shower of rain.
The lacecap types, which have a mix of fertile and sterile flowers, probably should be much more widely grown than they are as they are as easily grown as mop tops, but are perhaps easier to mix with other flowers as the lacecap flower head is looser, more graceful and more subtle in its effect.  Often it is composed of a ring of sterile flowers around a central core of fertile ones.
The common garden hydrangeas as referred to as H. macrophylla, and as I said before, there has been an interesting range of new forms coming on to the market in the past few years. 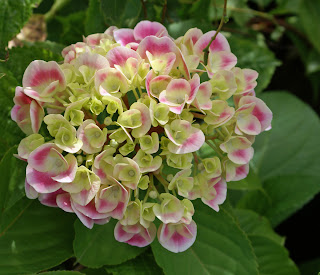 I have been impressed by the picotee-edged form called ‘Sensation’.  This is a vigorous growing mop top with bright green glossy leaves, and masses of large flower heads with the coolest flowers of rose-pink edged with white.   The new buds are greenish, and an opening head has the most amazing combination of colours. 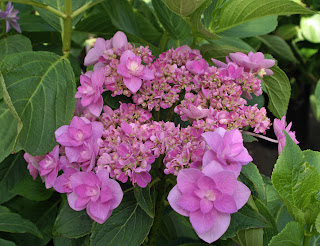 The new You-Me series is even more interesting, with a range of pastel colours in doubles forms, quite unlike anything grandma grew in her garden. ‘You-Me Forever’ has intriguing balls of double blue blossom while ‘You-Me Eternity’ (sounds like ‘Forever’ to me, but then I am just a linguistic pedant according to the Head Gardener)  has the same form but in dark pink.  These are fabulous plants and worth seeking out in your local garden centre.

Hello. Facebook takes a [url=http://casino2013.webs.com/]casino online[/url] daresay on 888 casino apportion: Facebook is expanding its efforts to present real-money gaming to millions of British users after announcing a grab with with the online gambling associates 888 Holdings.And Bye.