The lost tribe of the Inca 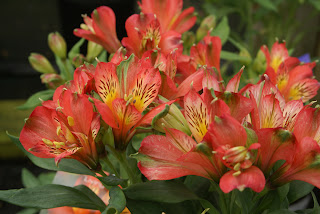 Being a basically conservative sort of gardener, things can creep up on me a little.  A plant may be getting a little large for its space, or perhaps suffering from dieback or another ailment and I will not notice it usually.  But the Christmas/New Year period offers a chance to keep on top of those sorts of things.  I have more time to spare to just wander around the garden instead of rushing from plant to plant, and from weed to weed!  And I can also wander around with the Head Gardener, listening to her very subtle offerings about the suitability of various plants.
This year there are a number of overgrown trees that will need to be carefully thinned out, especially a large silver matipo, Pittosporum tenuifolium, which is growing hard against the back fence, and has spread its arms just a little too wide.  A crested iris, probably I. confusa I think, growing at its base has also had territorial ambitions, expanding to cover a large portion of the back border, and intermingling with a similarly-minded red Flower Carpet rose. These will all be trimmed, pruned and perhaps removed, to make room for some more interesting and exciting plants.
While I was sizing them up I also looked at a couple of patches of Peruvian lilies, Alstroemerias, which I planted about 12 years ago.  They were red and golden forms of the Inca series, and were a gift from their New Zealand agents. The Inca Alstroemerias are bred by one of the world's largest breeders, Konst BV of the Netherlands, specifically for use as garden planst.
I confess I was a little suspicious of these plants when they were given to me, being sceptical about the claims of that they were true dwarf varieties, and that they would behave themselves in the garden and not run all over the place.
I have had bad experiences with Alstroemerias before.  We had a patch of the unusually coloured A. pulchella, (also known as A. psittacina) from Brazil, which has flowers that are dark red marked with green and blotched dark purple. It was growing in very well-drained sandy spoil and it was a nightmare to get rid of – it took a few years of assiduous digging to finally get all the little tubers out.
We had a similar problem with a hybrid we bought for one of the back gardens.  A tall form, obviously derived from the energetic old species A. aurea which you will find romping around a lot of old gardens,  this one decided it liked the part of the north-facing bed it was in so much that it would take the whole bed over.  We have been digging it out for the past seven years and it still managed to throw a shoot up every year.  I think I would need to kill everything in the bed, remove all the soil, sieve it all and taking any tuberous remains away, before we would finally get control of it.
So you can imagine my caution about planting these gift plants, but I have to say they have been very well-behaved plants, both eventually spreading to about a metre across after many years, and both giving a great source of cut flowers, albeit with short stems.
Quite aside from their value as bright and cheerful garden plants for sunny parts of the garden, they are also one of the world's most popular perennials for use in bouquets as a cut flower, happily lasting for weeks.
But the time has come for a change, and I have been looking around at some of the newer varieties, including a number of the newer Inca varieties.  One that has taken my eye in my favourite garden centre is ‘Inca Joli’, which has a mass of deep orange-red flowers with a yellow striped throat, on a compact plant.  ‘Inca Pulse’ is similar, with bright and luminous warm red flowers with a bright yellow throat.  If you like more subtle colours, or you are a bicycle fan,
‘Inca Avanti’ might be your choice, with soft peach/pink flowers with yellow striped throats.
I was also rather taken with a couple of other forms.  ‘Bryce’ has unusually-coloured flowers – they are a jumble of apricot and peach, with yellow throats, speckled darker, and I would imagine that would look great planted in a terracotta tub or planter.
Posted by Unknown at 7:51 PM

Hello, Can I please use this picture of your alstroemeria to sell this variety on ebay and our website at www.plantinspirations.com.au
I am having trouble sourcing a copy right free picture.