Another kind of garden 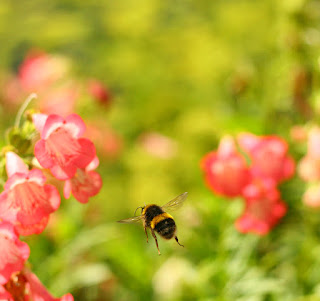 Photograph of a bumblebee approaching a Penstemon - Dr David Winter

In the past have I written about the various kinds of gardens that we create – gardens that are filled with flowers,  those that are crammed with a multitude of unusual and rare plants, and those where the concentration is on the overall effect of the garden, with design being a strong component of the joy the gardener derives.
This holiday season I had an insight into a different kind of garden, thanks to the efforts of my scientist son, home from Dunedin. In December Radio New Zealand broadcast an interview with him as he showed their science correspondent Veronika Meduna around his garden – the link is here http://www.radionz.co.nz/national/programmes/ourchangingworld/20121206   I was intrigued to listen, as he had many admirable skills but top notch gardening is not one of them, and his hillside patch is an interesting mix of pioneer plants (weeds, that is) of various stripes, with a few garden patches interspersed.
Turns out he was not showing her around his garden plants so much as guiding her to various spots in the garden where different insects and other creepy crawlies were hiding out, and regaling her with details of how interesting it all was.
When he came home for Christmas he informed me he was going to be harvesting from my garden for the lab sessions he takes at Otago University, and I thought he was interested in the genetics of some of our plants, but again I was wrong.  He spent a part of each day while he was home gathering bugs of varying kinds that had been attracted to the death trap that is our swimming pool.
There is a remarkable variety of flying critters of all kinds to be found in different states of swimming and drowning in the pool – cicadas, flies of various kinds, bees (both honey and native), bumble bees, a variety of beetles, and even a few spiders.
It made me see the garden the way he, an inveterate invertebrate lover, sees it – as a place where humans construct an environment to attract as many different kinds of wild life as possible.
He took me on a little tour of my garden, showing me some perfectly cylindrical holes (with piles of soil beside them) in the compacted mulch around the old vegetable garden, pointing out that these were the nests of the small native bees we had seen in the pool. We then went hunting to see if we could find the bees at work in the garden, and quickly discovered them at work on a flowering hebe – there were dozens of them zipping in and out of the small flowers on each raceme.  We also found them at work on a parsley plant I had allowed to flower, alongside native flies and honey bees.
When I spent a morning slowly filling up the wheelbarrow with weeds and trimmings from the garden, I took my time to unload it, looking carefully at the range of invertebrate life I had also accidentally gathered, and was surprised at the variety.  As well as the earwigs and slaters I had expected to find there, I could usually find three or four different species of spider, a couple of different ladybirds (including that lovely steel blue ladybird which has become more common in recent years), and a range of scale insects from trimmings, “fluffy bums” (juvenile passion vine hoppers) and even a few ants and aphids.
It was a bit of an eye opener for me, as I would have said I was an observant gardener who took notice of the environment I was gardening in, but I guess I have not quite seen the garden as such a source of biodiversity, and it made me think about some of the things we can do in the garden to encourage a wider range of wild life into the garden.
Posted by Unknown at 4:34 PM