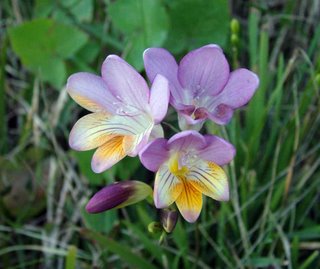 We have been on holiday recently, in Rotorua and Gisborne. We were booked into a motel out at Wainui Beach, a couple of minutes past Gisborne city, and the beach proved too much of a temptation to us when we arrived. We quickly got into beach clothes and made out way across the road and down onto the long sandy beach.
It did not take too long for us to get tired, so we retraced our footsteps towards our entrance to the beach at “Sandy Cove.” I was surprised to discover that a large colony of wild freesias had established itself along the dunes at the entrance of the beach, and I spent some time among them, smelling and photographing.
I was aware that Freesias have established themselves in parts of Australia, and are regarded as weedy pests in Victoria and in South Australia and West Australia, but I have never seen such a large colony growing in the wild in our country.
As I would have expected, the colony at Gisborne seems to be largely formed of hybrids from F. alba, and most of the flowers are white, with a significant proportion having purple-backed petals, although there are also some creamy coloured forms, and some lovely mauve-flowered plants too. I even found a few with very attractive markings.
They reminded me very much of the large plantings my mother used to have in a very dry spot facing north, under her bedroom window. In this hot bed, a jumble of bulbs, mainly from South Africa, battled it out with each other for floral supremacy. The Freesias were regular winners in early spring, and a wide range of small flowered hybrids, in muted tones, flowered each year.
I am sure the Gisborne plants are fence-jumpers as I saw a number of wonderful borders filled with the white Freesia ‘Burtonii’ in beachside gardens on another stroll through the Wainui village. I guess the predicted global warming might mean this plant could become more of a problem in beach areas, but it was great fun to see these plants growing wild.

My own Freesias were in flower when we arrived home from our trip. I have pots of the golden double flowered form ‘Yvonne’, and of the deep purple single form, ‘Blue Navy’ –well, they were labelled ‘Blue Navy’ when I bought them, a double form, but they are actually singles.
I also have ‘Attica,’ another modern hybrid, this time white, growing in a pot. This variety has bulked up quickly but its growth rate is nothing like that of the old fashioned ‘Burtonii’ that most gardeners are familiar with.
This was a chance sport of F. refracta alba, and arose in the Nelson garden of a Mrs Burton, after whom it is named. For many years this was by far the most popular Freesia in our country. Its creamy flowers, with their bright golden spot and absolute absence of any purple staining, made this enormously popular. Over recent years this variety seems to have lost its vigour and it is harder to find in garden centres.
Some years ago I was given a double-flowered form of F. refracta alba. I have never seen this offered in nurseries, so it has probably only been passed from bulb lover to bulb lover. It is small flowered and has a messy centre but it is an interesting old plant.
The Freesias at Wainui Beach have colonised so well because they carry prolific amounts of seed – except ‘Burtonii’ which is sterile. The gardener can use this proclivity to their own benefit buy raising crops from seed. Most reputable seed companies stock at least one mix of these and they are easy and fun to grow.
Posted by Archivist at 5:24 PM